Did You Know? Route 6A is the BEST Cape Cod Scenic Drive!

Most people who drive from one end of Cape Cod to the other take Route 6, which is a state highway. Instead, taking Route 6A will make your trip more memorable. Among the scenic drives that Massachusetts has, it’s the most iconic. We’ve put together information about 11 towns that this Cape Cod scenic drive passes through as well as points of interest in each one.

Also known as Old King’s Highway, Route 6A is one of the most historic byways in the United States. In fact, it consists of the country’s biggest contiguous historic district and has received widespread attention — National Geographic describes it as one of the World’s Most Scenic Drives, Smithsonian Magazine says it’s the nation’s most appealing stretch of highway, and Yankee Magazine calls it iconic and timeless. Additionally, the highway achieved National Scenic Byway status as of January 2021, making it one of only four scenic drives Massachusetts has with this designation. And Candleberry Inn is centrally located on the Old King’s Highway in Brewster.

Stretching nearly 65 miles, Route 6A runs from Bourne on the Cape Cod Canal to Provincetown at the tip of the peninsula. On a portion of the highway between Eastham and South Truro, it merges into Route 6 before reemerging in North Truro and extending to the coast of Provincetown. Through many of these towns, Route 6A is referred to as other street names, such as “Main Street”.

Originally, Old King’s Highway was a trail that connected Native American villages and encampments. They used it as a trade route, possibly for thousands of years. Then, Mayflower Pilgrims used the trail for their carts and wagons when they arrived in the 1600s. The route became an extension of the colony’s King’s Highway. In the early 1900s, the trail was made to accommodate automobiles.

Now, Route 6A follows much of the original trail, running along Cape Cod Bay and the landscape’s creeks, inlets, marshes, and small tidal rivers. Additionally, there’s a lot of original architecture from the 17th to 20th centuries throughout the Old King’s Highway district. You can clearly see the architectural evolution, which is unique for a historic district.

With this long history in mind, let’s dive into the towns and some interesting things to do on this Cape Cod scenic drive.

Start Your Road Trip in Bourne

The best way to enter Cape Cod is via Bourne Bridge because it gets less traffic than Sagamore Bridge to the north. Fortunately, Bourne is where Route 6A starts — although it’s called Sandwich Road in this town.

On the Cape Cod Canal banks is The Museums at Aptucxet, a 12-acre campus of small historic buildings, replicas, art galleries, and more. The Aptucxet Trading Post is the main museum and replicates the 1628 Pilgrim Trading Post. Just after Sagamore Bridge and before getting to Sandwich, Pairpoint Glass Company is the oldest glass company in the U.S. It has created pieces for former presidents and Queen Victoria.

In Sandwich, the highway is generally referred to as Route 6A. It’s the oldest town on the Cape and offers outdoor adventures, arts and culture, and historic sites. Sometimes called the “Plank Walk,” the Sandwich Boardwalk is a 1,350-foot wooden walkway that was originally built in 1875. It crosses Mill Creek and the marsh and has been rebuilt many times.

The Sandwich Glass Museum offers a history lesson on the town’s involvement in American glass production. From February to December, You can watch the glassblower create wonderful pieces. Although on separate properties, the Dexter Grist Mill and Hoxie House are representations of 17th-century life on Cape Cod.

As you enter Barnstable on this Cape Cod scenic drive, Route 6A will be called Main Street. Rather than one distinct town, this area is a collection of old villages.

The northern side of the town consists of the Great Marshes. This is where you’ll find Sandy Neck Beach for swimming, and there are hiking trails, dune overlooks, and maritime forests just south of the beach. Farther into Barnstable, the Cape Cod Art Center has been displaying art and organizing art events and programs for the community since 1948.

Pass Through Yarmouth as You Drive East

Scenic Route 6A is referred to as Main Street in Yarmouth. This town features dozens of historic homes, and many of them were once owned by wealthy sea captains. They make great photographs, so get your camera ready!

You can stretch your legs on the Nature Trails, which are located on a former golf course and maintained by the Historical Society of Old Yarmouth. The entrance for the five trails is located behind the Yarmouth Port Post Office. Just down the street is Edward Gorey House, a quirky 200+ year old home that was owned by a sea captain and is open for tours.

Stay on the National Scenic Byway to Reach Dennis

Through Dennis, Route 6A is called Old King’s Highway and Main Street. This town has several pristine beaches, galleries, museums, and one-of-a-kind shops. It’s home to the Cape Cod Museum of Art, which was founded in 1981 and features works from the finest artists on the peninsula.

You can watch a live show at The Cape Playhouse, which is considered one of 50 Best Small Stage Theatres in America. Many famous actors have graced its stage, including Ginger Rogers, Julie Andrews, Betty White, and Shirley Booth. For an outdoor stroll, visit the 30-foot, cobblestone Scargo Tower that rests on Scargo Hill, the highest hill in the area.

Cruise Into Brewster to Get Closer to the Bay

Midway through the Cape Cod scenic drive, you’ll enter Brewster, where Route 6A is referred to as Main Street. It’s one of the most recognized coastal towns on the Cape and has a rich history and plenty of outdoor activities, such as beautiful beaches and Nickerson State Park.

While you’re here, check out the Cape Cod Museum of Natural History which has many artifacts, interactive exhibits, and 400-plus acres of land with walking trails and a beach. You can learn more about the area at Cobb House Museum and Windmill Village, two of the town’s most historic sites. There are a lot of other things to do in Brewster as well if you stay at Brewster’s Candleberry Inn bed and breakfast to rest.

When you enter Orleans, you’ll notice that Route 6A turns into Cranberry Highway. During the Revolutionary War, the town was captured by the British twice, so the residents decided to give it a French name rather than an English name as a show of gratitude for French support.

Also of note, Orleans was the only U.S. town attacked by the Germans during World War I. French General Pershing communicated to the U.S. government via the French Cable Station, which is now a museum that you can tour. Another historic site is the Jonathan Young Windmill, which still has many of its early machinery and parts intact.

For a bit of fun, check out Cape Escape Adventure Golf. It has an 18-hole mini-golf course with a nautical theme, including authentic fishing boats, waterfalls, and live koi fish.

Head North on Route 6 to Eastham

As you enter Eastham, Route 6A disappears into Route 6, which is also called the Mid-Cape Highway. The main attraction of this charming town is the Cape Cod National Seashore, which President John F. Kennedy established in 1961. In fact, the town is home to its Salt Pond Visitor Center.

There are several sandy beaches and lighthouses within this protected area — you just have to stray from the highway a little. Coast Guard Beach in Eastham is worth visiting for swimming, and has consistently been named one of the top ten beaches in the U.S. by Travel & Leisure Magazine. The Three Sisters lighthouses are three towers with a long and interesting history, and you can walk around them. Cape Cod’s most photographed and well-known lighthouse, Nauset Lighthouse has been an important part of the town’s cultural and maritime history, and Nauset Light Beach is nearby.

Stay on the Scenic Highway to Enter Wellfleet

When you get back onto Route 6 and enter Wellfleet, you’ll see a beautiful small town with a busy waterfront and several dining and shopping options. In this section of the Cape Cod scenic drive, you could stop by Wellfleet Cinemas for more than a drive-in or indoor movie. It has a flea market, mini-golf course, and dairy bar with hard-packed and soft-serve ice cream.

To enjoy a bit of nature, go to the Wellfleet Bay Wildlife Sanctuary. You can hike the trails to a salt marsh, pine woodlands, and sandy barrier beach.

Truro is the next town that Route 6 passes through, and Route 6A separates from it in the northern section — although it’s called Shore Road. As part of the Cape Cod National Seashore, the Highland Light is the oldest and tallest lighthouse on the peninsula, and it’s located on a 120-foot cliff. The adjacent Highland House Museum exhibits fishing and whaling gear, shipwreck artifacts, and ship models.

For a change of pace, grab a glass of wine at Truro Vineyards. You can tour the vineyard and winery. Before leaving, purchase some wine to take home from the gift shop, which is located in a fully restored 1830s farmhouse.

End Your Road Trip in Provincetown

As you approach the tip of the peninsula, you enter Provincetown where this National Scenic Byway is known by three other names — Commercial Street, Bradford Street, and Province Lands Road. The first thing that you’ll notice about this seaside town is the mecca of restaurants and shopping. At the end of Route 6A (Province Lands Road) is Herring Cove Beach, which has amazing sunsets.

And at more than 252 feet tall, it’s hard to miss the 1892 Pilgrim Monument. It stands in honor of the Mayflower Pilgrims’ arrival, and the town is where the Mayflower Compact was signed. Also on the property, Provincetown Museum is an old-fashioned history museum that chronicles the area’s history — from the Pilgrims to modern American theater to the monument’s construction.

Where to Stay During Your Cape Cod Scenic Drive

While traveling one of the most scenic drives Massachusetts has, you can rest in a luxurious room or suite at Candleberry Inn bed and breakfast in Brewster. Our location in the middle of Cape Cod gives you convenient access to the countless things to do on Cape Cod. To fuel your adventures, we’ve put together a guide of the best restaurants on Cape Cod, too. 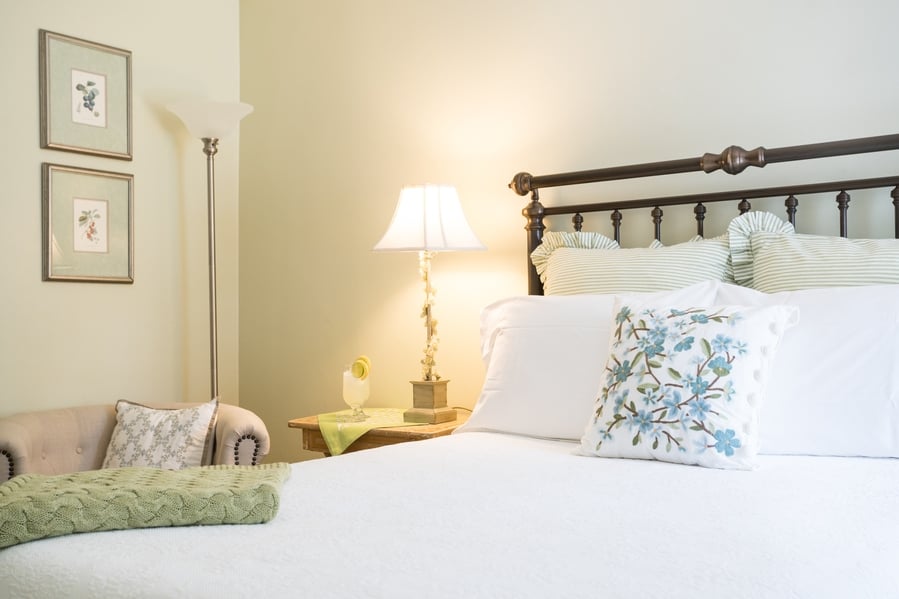 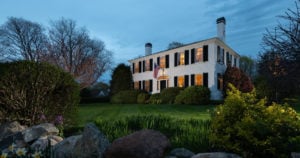 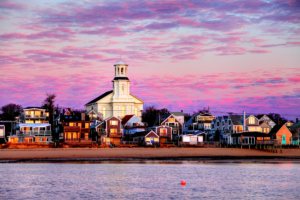 16 Stops to Include on Your Provincetown Day Trip Itinerary 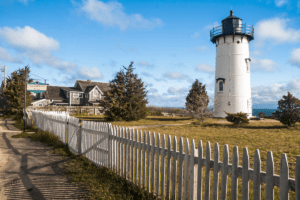 7 Excellent Reasons to Visit Cape Cod in the Off-Season 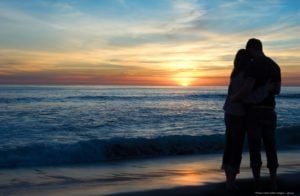